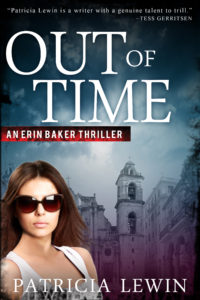 In Patricia Lewin’s novel of breathless suspense, a shaken CIA officer returns to the field, drawn not by duties but by the chance to save a man’s life . . . and to meet the father she hasn’t seen in years.

Though Erin Baker has left the CIA, the people who once directed her career tap her to penetrate a medical aid group that may be hiding a sinister purpose. In Cuba, the organization’s head doctor is Emilio Diaz, Erin’s estranged father. Erin has the skills and a perfect cover to penetrate Castro’s shadow world. She also has another reason to take the assignment. An ex-mentor, previously on the case, has vanished somewhere in Cuba.

Full of emotional landmines, this mission comes at a time when Erin’s life is at a crossroads. Alec Donovan, a colleague at the FBI, is pushing for more than friendship, and he wants Erin out of the Agency’s clutches. But Erin is already in-and though wanting to trust her charismatic father, she suspects that a dark plot is unfolding. Not knowing whom to trust or whom to believe, Erin fights her way deeper undercover until she is ultimately forced to make life-and-death decisions that will affect nations around the world.

DEATH PRESSED AGAINST against her temple.

Chilling, hard steel, small caliber, but still lethal at this range. Sudden and unexpected, the gun and the man holding it had caught Erin off guard.

“Breathe,” said the familiar voice behind the weapon. “While you still can.”

“Helton.” Erin whispered his name and tried to steady herself against the certainty of her own death. A gun to her head made it too easy to forget her years of training, made everything but fear slip away.

A second man came into her field of vision, a thick stripe of tape across the bridge of his swollen and discolored nose. Erin shivered when he looked at her, hate ripe in his eyes. One of Helton’s hired killers, the last time she’d seen him, he’d been sprawled at her feet, cursing and grasping at his shattered face. Now he seemed ready to return the favor, or worse.

Had Helton killed him? The only way Helton would have gotten past Alec was if he was already dead. The thought settled like a weight in her stomach, making breathing once more a difficult task.

Helton nudged her with the gun, just a little left of her spine, sparking her anger. Better than fear or grief, it was an emotion she could handle. And use. Except she didn’t see how.

“On the floor,” Helton said.

Erin hesitated. Once they had her on the ground, it would be too late. If she was going to do something, it had to be now, while she still had her feet beneath her.

“Don’t even think it, Erin.” Helton must have read her mind, because she looked into his eyes and saw her own death.

He was right. It was all over.