I imagine Andy Weir was a bit daunted by the prospect of following his surprise blockbuster, The Martian, with a new novel. Most authors build their skill and readership over numerous books, so that by the time they write that breakout novel, the one that gets all the buzz and a movie deal, they’re well- grounded and confident in their skills. Andy Weir, however, didn’t have that luxury, and I expect he, like a lot of his readers, were wondering if he was a one-book wonder. So, I admit, I was a bit skeptical about reading his next book – oh, I had to read it – but I was ready to be disappointed. 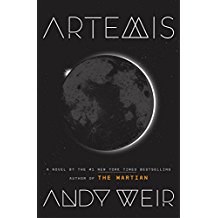 Okay, you all can laugh now.

I was so wrong. In its own way, Artemis is every bit as good as The Martian.

First, Artemis is a very different type of story than The Martian. It’s a heist / thriller vs. a strictly survival story. However, there are similarities. It’s set on the Moon in the near-future, and once again Weir draws on his scientific knowledge to give us a taste of what living there might be like. But he never goes overboard with details. In fact, his main character often makes fun of the scientific details.

Which brings me to my next point. Not only is the setting of Artemis similar in time and space to The Martian, but Weir’s style and voice are every bit as engaging in Artemis. Let’s face it, a lone survivor on Mars could have been very dull story, but it wasn’t. Instead Weir’s ability to create great characters with humor as well as a lot of smarts, turns his stories into something fun, interesting, and engaging.

So, if you enjoyed The Martian, I promise you’ll like Artemis as well. And yes, I plan to read his third book whenever it shows up.